RIGAKU THROUGH THE AGES

Rigaku was founded by Dr. Yoshihiro Shimura, in Tokyo, Japan. 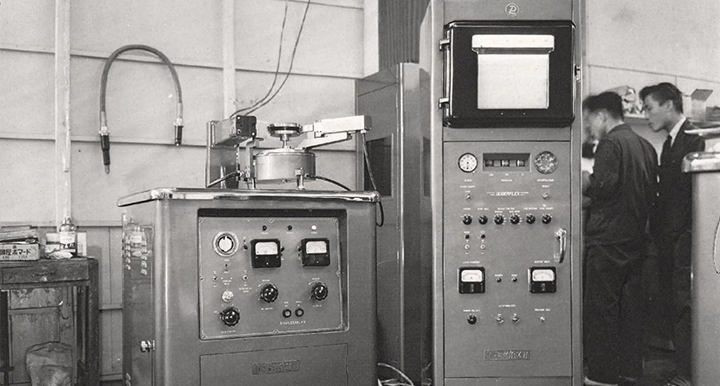 The world's first spectrometer capable of boron analysis is developed. 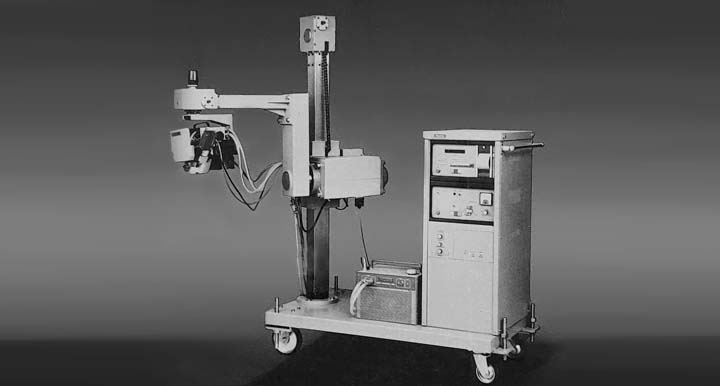 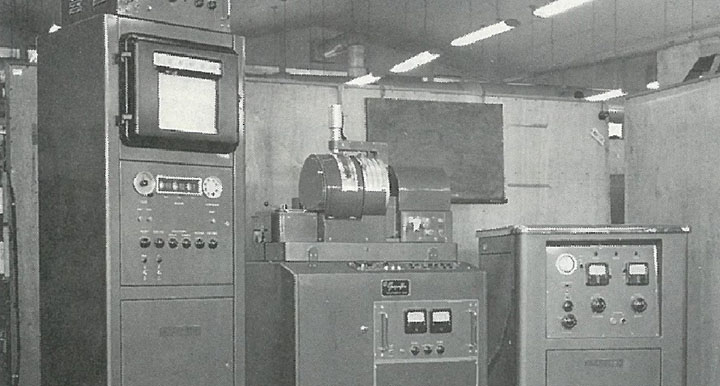 The "KG-3", the first X-ray spectrometer developed for factory use

For decades, Rigaku four-circle diffractometers were the workhorse devices used by crystallographers around the world for small molecule and protein structure determination. Many are still in service.

Specifically designed for the Rigaku X-ray micro diffractometry system. The data being measured are available for real-time observation.

A double-crystal spectrometer is developed. This camera is used for measurements of extremely small lattice defects, lattice distortions, inclinations of the lattice planes, and other variants of nearly perfect single crystals like silicon or germanium.

A nondispersive X-ray spectrometer is developed

The system is used to determine the concentration of elements by measuring the difference in counts between two matched detectors, each using a different filter—one for absorption and one for transmission. 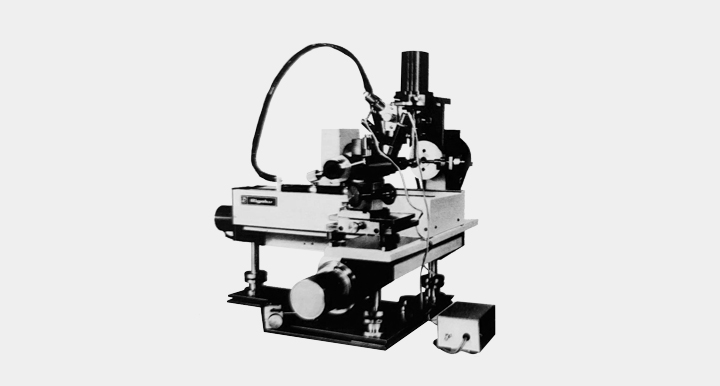 The microdiffractometer is designed to obtain diffraction patterns from exceedingly small samples as well as extremely small areas optionally selected on a sample. It permits the operator to perform identification analysis and quantitative analysis. 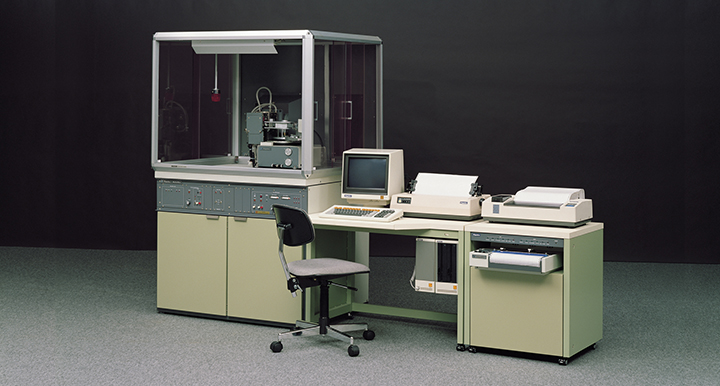 The Rigaku “D/Max Series B” X-ray diffractometer system incorporates a “Multi-CPU System” to provide diversified, high-speed data processing. The outstanding features of the new D/Max are the result of Rigaku’s more than fifty year experience and expertise in the design and manufacture of X-ray diffraction instrumentation. 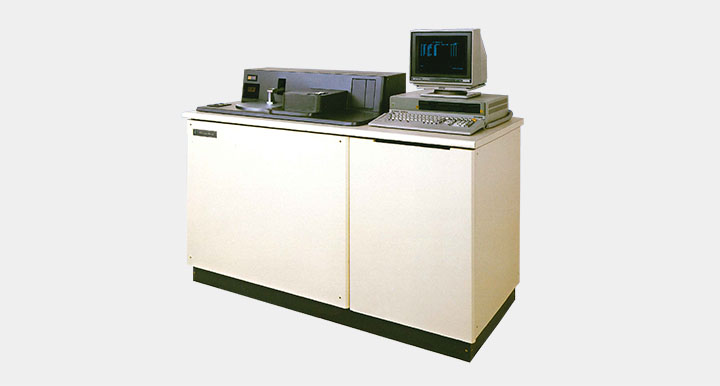 Rigau’s wafer analyzer is specifically engineered for semiconductor manufacturers, to make simultaneous measurement of the elemental composition and thickness (single or multilayer) of deposited or implanted films.

The use of dual imaging plates as two-dimensional detectors allowed the rapid measurement of diffraction patterns from crystallized proteins. While one plate was collecting data, the other was being read out using a laser system. 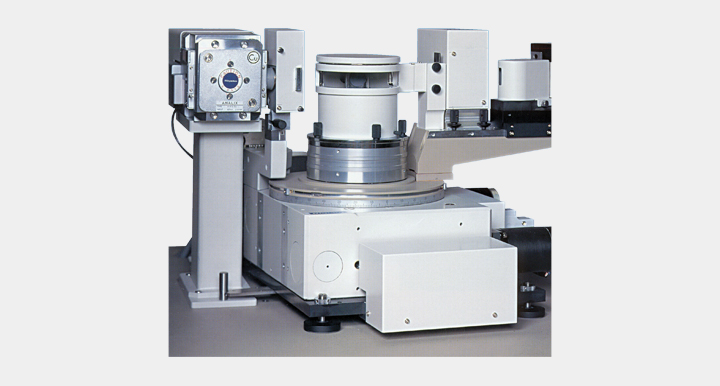 The "D/MAX 2000," X-ray diffractometer and the "RIX1000" X-ray spectrometer systems are released

The RIX1000 is a low-cost version of the existing RIX2000 that has similar capabilities, including sophisticated fundamental parameter methods and automatic qualitative analysis.

Multiple layers of different electron density are deposited on a parabolic curved surface providing a spectrally pure, low-loss and low divergence optic. The d-spacing of the multilayer is varied across the surface satisfying Bragg’s Law at all points. This improves spectral purity and spatial distribution for better data quality.

The "3640" wafer/disc analyzer is developed 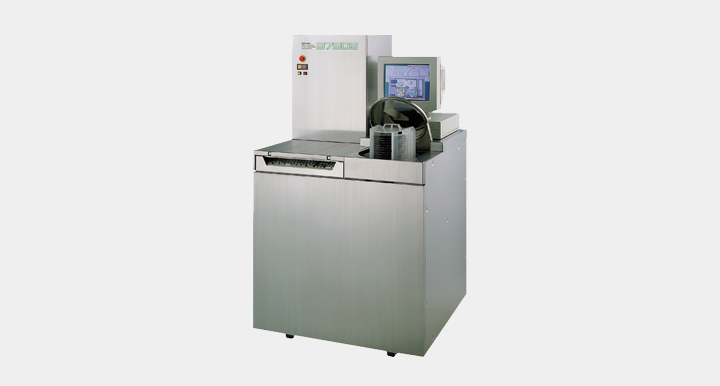 The System 3750, the newest TXRF instrument, covers a broad analysis range from light to heavy elements and offers a high-performance and rapid analysis tool despite its simple and compact design.

The MiniFlex+ was developed with a totally new philosophy; “Plug 'n Play” XRD. It is small and lightweight; about 1/20th the volume and 1/10th the weight of conventional X-ray diffractometers. Rigaku foresees that many new applications for XRD will be developed because of the portability and low cost of this high-performance system.

Molecular Structure Corporation was formed in 1973 as the first company in the world to offer crystallographic studies as an analytical service. In the 1980s, MSC became the exclusive North American representatives for Rigaku single crystal instruments.

For the first time, two graded multilayer optics are bonded together producing a double bounce optic for a nearly monochromatic, high-intensity X-ray beam. Side-by-side geometry results in quicker and easier beam alignment along with increased flux and greatly decreased background.

Manufactured by a new division of Rigaku, this CCD detector is introduced to the small molecule crystallography market for use with automated four-circle diffractometers, greatly speeding up data collection.

This 2x2 array of CCD detectors is used primarily by protein crystallographers to speed up data collection when using automated four-circle diffractometers.

Rigaku/USA, Inc. Danvers, MA announced that they have completed the acquisition of Osmic, Inc., a leading producer of X-ray optics. Osmic has long been a critical supplier of X-ray optics to Rigaku and other X-ray instrument manufacturing companies.

Saturn 70 is the most sensitive small molecule CCD detector, providing higher resolution and more redundancy at a given crystal-to-detector distance with the large 70 mm x 70 mm aperture. The most advanced chip technology gives over 96 electrons per incident MoKa photon.

The R-AXIS HTC (high-throughput crystallography) has an innovative three IP (300 mm x 300 mm) design with 10 second deadtime and dual read heads, providing throughput approaching that of CCD detectors with the large active area and superlative dynamic range of an image plate detector. Suitable for the high intensities of a synchrotron or the perfect complement to in-house rotating anode generators.

Rigaku/USA and its fully owned subsidiary, Molecular Structure Corporation (MSC), merged to form Rigaku/MSC, Inc. This action follows a transition year in which Rigaku/USA’s XRD, XRF, and semiconductor groups were moved from Danvers, MA to MSC’s new facility in The Woodlands, TX USA. The newly formed company, a fully owned subsidiary of the Rigaku Group, acts as a distributor of Rigaku’s XRD, XRF, and semiconductor instrumentation in North America and Rigaku’s single crystal instrumentation in most of the world. 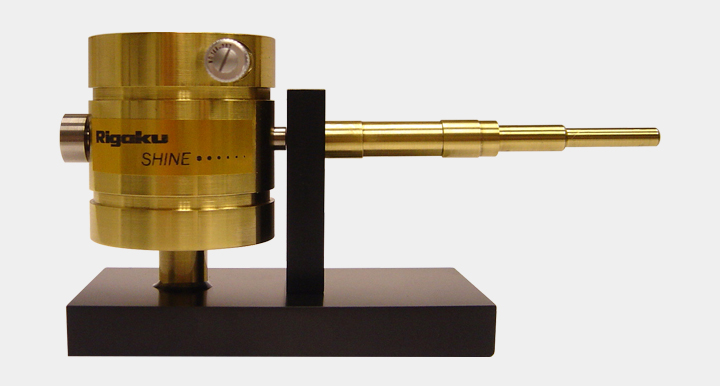 The new Rigaku Saturn 724+ is the next generation of CCD camera for small molecule crystallography, while the Saturn 924+ is designed for protein crystallography. Incorporating the newest and most sophisticated Kodak® CCD chip, these detectors provide a new dimension in data quality, with a very fast readout speed, a large active area and broad dynamic range.

Rigaku Corporation announced the formation of Rigaku Innovative Technologies Europe s.r.o. (RITE) as a European center of excellence for the design, development, and manufacture of X-ray optics, X-ray detectors and X-ray sources, as well as other related scientific products for industry and research. RITE, a wholly owned subsidiary of Rigaku Corporation (Tokyo, Japan), will be headquartered in fully-equipped, optimized facilities in Prague.

Newton Scientific, Inc., founded in 1994, is a major supplier of miniature X-ray sources for handheld, portable and benchtop x-ray instruments, and supplies very high voltage power supplies to manufacturers of semiconductor equipment. In 2010, NSI was acquired by Rigaku Corporation.

Rigaku Americas Corporation is pleased to announce the acquisition of the handheld Raman technology and product lines from BaySpec, Inc. and the concurrent formation of a new division, Rigaku Raman Technologies Inc., for R&D, engineering, production, marketing and distribution. 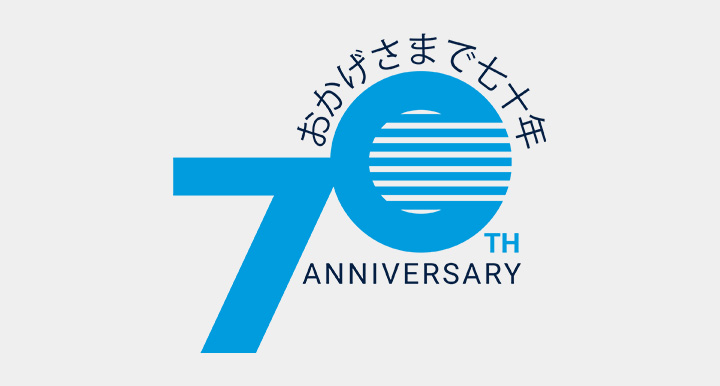 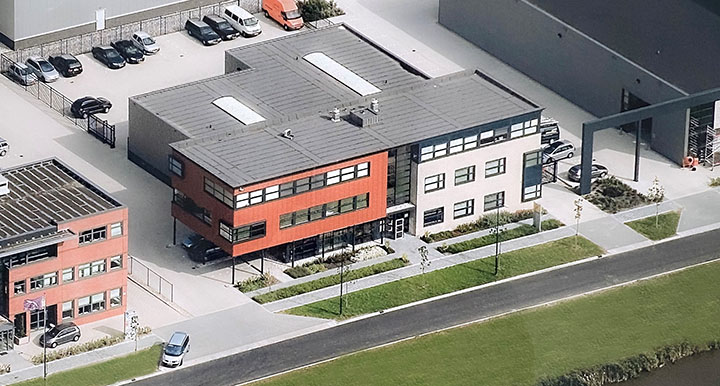 MILabs products are used in more than 65 countries and are supported by a global network of distributors and factory trained support engineers. 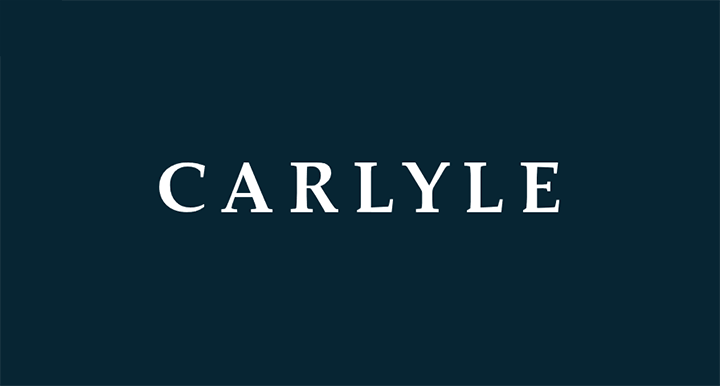 Rigaku announces that that global investment firm The Carlyle Group (NASDAQ: CG) and Mr. Hikaru Shimura, former President and CEO of Rigaku has agreed to jointly acquire all outstanding shares of Rigaku.