Comparing cellulose in Sitka spruce and in celery

Comparing cellulose in Sitka spruce and in celery

Wood is a material of immense technological importance, and is ubiquitous in everyday life. As well as a fuel, it has been an important construction material since humans began building shelters, houses and boats, and it is enjoying renewed importance in construction as an environmentally sound and sustainable material. The uses of a particular type of wood are entirely dependent on its physical properties, but despite its economic importance, the structure of wood that underlies these physical properties is still poorly understood. However, as most wood consists of 45-60% cellulose, it is clear that understanding the structure of cellulose fibres within the wood is important to understanding the physical strength and lightness of the material. To this end Wide Angle X-ray Scattering (WAXS) or fibre diffraction images were measured on several different wood samples and other fibrous plants including celery using the RAPID II diffractometer. The diffraction pattern arising from these fibrous materials contains some structure from which information on the angle of the fibres relative to each other can be extracted. The advantage of the D/MAX RAPID's large detector area enables all the required information to be measured in a single image, and the large dynamic range of the imaging plate means that it is possible to vary the image exposure without worrying unduly about overloading the detector. 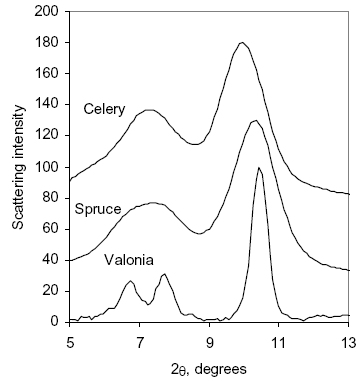 In most samples two symmetrical peaks are observed (above) and the full width at half height gives information on the microfibral angles. Whilst it is not possible to accurately move the sample laterally within the RAPID II, it has been possible to measure representative slices through different sections of wood with sub-millimetre accuracy. Images can be measured in less than 5 minutes and the relevant part of the diffraction image integrated about Χ using AreaMax. The cellulose of celery collenchyma was compared with the cellulose of Sitka spruce early wood, which is equally well-oriented. Both materials were examined intact with the cellulose in situ to avoid structural alteration or aggregation of cellulose during isolation; the radial profiles of the principal equatorial reflections from both, and for highly crystalline cellulose from Valonia. It is visually evident that the diffraction patterns from the two higher-plant celluloses differ from one another as well as from Valonia cellulose. The [110] and [110] reflections are not clearly separated as they were in Valonia cellulose, but the degree of separation was sufficient to give a flat-topped intensity peak in the WAXS pattern from spruce earlywood cellulose. In the WAXS pattern from celery collenchyma cellulose these two reflections merge into what appears to be a single intensity peak. The peak of the [200] reflection is in a slightly different position for each source of cellulose. It is clear that there were differences in crystallite structure between spruce and celery celluloses. Spruce cellulose conformed broadly to what might be expected for a cellulose I structure with limited dimensions, but the reduced monoclinic angle and increased [200] spacing in celery cellulose are features of what has been described as cellulose type IV. Results courtesy of Andy Parkin, Lynne H Thomas and Chick C Wilson, Structural Chemistry Group, University of Glasgow