Polymorphs are chemicals with the same atomic components but the physical arrangement of the molecules differ. The differences in their structures cause polymorphs to behave differently—and within the pharmaceutical industry—this means bioavailability changes. It is important to differentiate polymorph types in any pharmaceutical formulation because a change in the polymorph will affect physical properties from particle size to solubility and have distinct impact on bioavailability of the drug. In some cases, the incorrect polymorph form may cause product recall and extra expense to revamp process lines and ensure that the formulation is correct.

Handheld Raman analyzers have the unique ability to analyze polymorph transformations and thus differentiate them from each other. However, because polymorphs are highly molecularly similar, “off-the-shelf” qualitative model standards sometimes can fail to separate these materials. The handheld Rigaku Progeny 1064 nm allows the user to delve into the data more specifically and create a method to shift the threshold correlation coefficient directly on the instrument. With this fast turnkey method, the Progeny can quite easily analyze the formulation quality by confirming the presence of the active pharmaceutical ingredient (API) in the finished product. 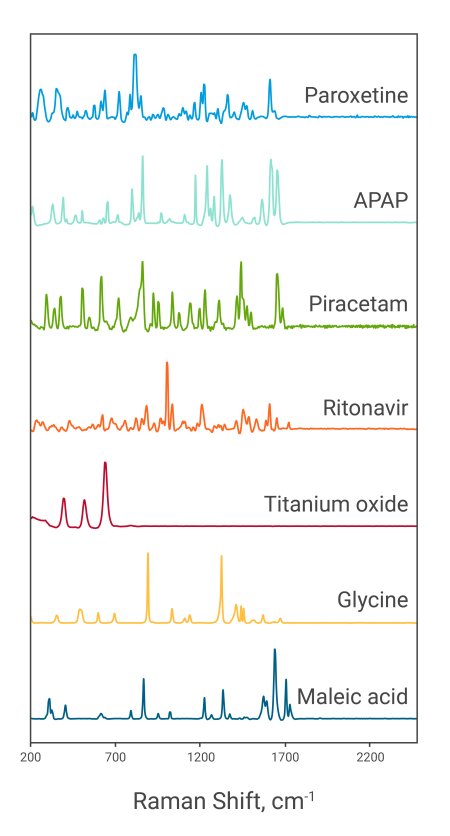 What Is Happening In The Raman Spectra?

With Raman technology, spectra is generated from the way energy affects the functional groups of a molecule. In many cases, the difference between two polymorphs is merely a change in the position of one or more major functional groups of the chemically equivalent molecules. While seemingly insignificant, the slightest rotation of a functional group can greatly change the way energy moves through that molecule, and can prevent or allow compression in a way that would not be possible in an alternate molecular configuration. The tendency of the molecule to interact at all with other molecules can also beshifted because of a change in the entropic state of the structure. Two polymorphs may have very small structural differences or a combination of many factors that can make their individual Raman spectra very different from each other.

Ranitidine HCl, known to be polymorphic, is used in the manufacturing of antacids. Ranitidine HCl exists in two different forms—Form1 and Form 2. The differences can be visualized in the Raman spectra overlay as performed by the Rigaku Progeny 1064 nm handheld Raman in Figure 1. The two forms differ in the small peaks present at (680, 1050, 1180, 1650 cm⁻¹) and in the shape of the major peaks at (1250, 1550 cm⁻¹). 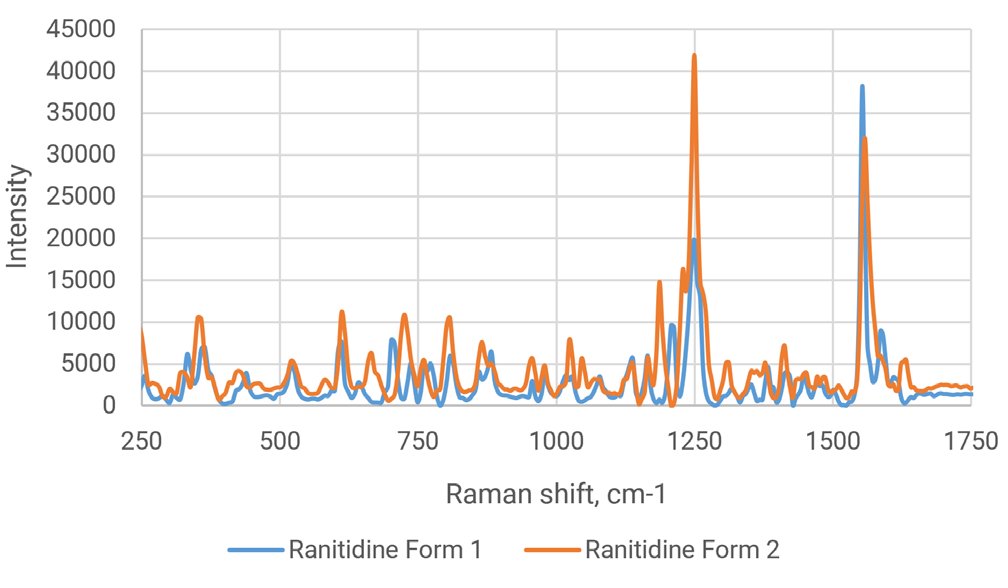 Overall there is approximately a 0.71 correlation between the two spectra; this is enough to separate the two Ranitidine forms in a library with a standard-threshold pass-fail type model with the Progeny analyzer. A standard correlation coefficient cutoff (i.e. 0.80-0.95) can be set to return a “Pass” result for one form and a “Fail” result if the other form is present. In this example, one form is used exclusively in a formulation. Adding the two forms to a library will allow for accurate incoming verification of the correct molecule polymorph and a robust validation to ensure that the incorrect form cannot be accepted.

Polymorph verification in intermediate and finished products is very important to a site’s overall quality awareness. Another fast spectral analysis check can also be added at the end of a process to ensure that the correct formulation is used in the finished product—in this case, a leading OTC antacid. This antacid tablet contains Ranitidine Form 2 and Progeny can be used to verify that the correct polymorph was added. A check of the spectral overlay of Ranitidine HCl Form 2 with the
tablet (Figure 2) shows good alignment with the Form 2 features. 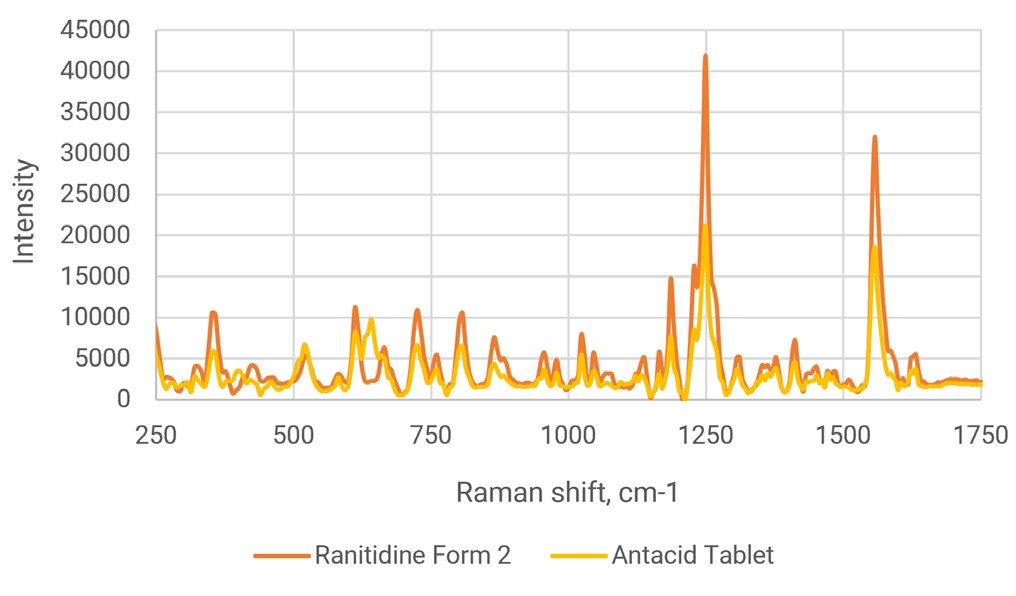 Figure 2. Spectral overlay of the antacid and Ranitidine Form 2 to show similar spectral features used to identify the form of Ranitidine in the antacid with Progeny 1064 nm Raman.

Since the antacid is a formulation, there are additional peaks present due to the presence of other excipients. Comparison of the antacid to the two forms gives a correlation of 0.80 for Form 2 and 0.31 for Form 1, so there is a clear separation to show selectivity between the two forms in final product.

The formulations of these doped-polymer products often use a molecule with multiple API forms. One polymorph will provide vastly superior formulation results to the others, and it is imperative that the form integrity is maintained throughout the manufacturing process. The unique extrusion process used can involve very high pressures and temperatures, both of which can cause a shift in the molecule and change of the polymorph form, thereby potentially limiting the efficacy of the final formulation. It is, therefore, important to be able to identify the form both prior to batch addition and throughout the product development and manufacturing processes, as is accomplished in this application with an at-line intermediate confirmation of the final preferred polymorph in the extruded product.

Polymorph use is widespread in the pharmaceutical manufacturing realm for the unique properties that they provide to molecular drug formulations. The ability to build an easy identification application and provide analysis of differentiate polymorphs is possible with the Rigaku Progeny 1064 nm handheld Raman analyzer. Progeny is a versatile tool that allows the user to build monitoring methods directly onboard the unit with full control of scanning and model parameters.