The use of hand sanitizers is becoming part of the everyday norm, and global demand has grown exponentially over the recent months. Hand sanitizers in liquid and gel formulations are being produced by manufacturing companies around the world. But what if these products consumers think are providing protection actually contain hazardous chemicals or fail to provide the protection they are being relied upon for? According to the Centers for Disease Control and Prevention (CDC), it is recommended that consumers use alcohol-based hand sanitizers with at least 60 percent ethanol. However, as the market need has soared at a rapid rate, manu­facturers have struggled to keep up with demand. Because of this, products with inadequate levels of alcohol have flooded the marketplace. In addition, the shortage of alcohol-based hand sanitizers has allowed for the introduction of potentially hazardous replacements or products that have an inadequate level of alcohol into the production process. These dangerous chemicals include methanol, 1-propanol, even petroleum, and cause adverse effects on the human body if absorbed through the skin or ingested—including blindness, cardiac issues, effects on the central nervous system and even death.

Regulatory agencies, such as the U.S. Food and Drug Administra­tion (FDA), are now monitoring and testing the influx of temporary preparations of hand sanitizers that are manufactured in the U.S., as well as those entering the U.S., by developing guidance docu­ments, issuing import warning lists, and implementing their own testing that utilizes Rigaku handheld Raman technology. There is a global focus on hand sanitizer manufacturing, quality control, and confirmation and the handheld Raman can be a key tool during all stages of quality analysis.

HANDHELD RAMAN FOR THE ANALYSIS OF HAND SANITIZER

With the recent focus on hand sanitizer production and the potential of hazardous contaminants or sub-par levels of active ingredients, manufacturers and regulatory agencies are in need of a fast and easy analysis method for on-site quality control, confirmation, and a means to protect their brand in anti-counterfeiting measures. The two main active ingredients in most commercially available alcohol-based hand sanitizers are ethyl alcohol (ethanol) and isopropyl alcohol (isopropanol). These chemicals, as well as many possible dangerous contaminants commonly found in handheld sanitizer formulations, are reactive to Raman spectroscopy. Similarly, the fragrances and dyes that are frequently part of this material set are highly favorable to 1064 nm-based Raman provided by the Rigaku Progeny and ResQ portfolio over alternative, lower wavelengths, such as 785 nm or 830 nm. This is due to the fluorescence interference these chemicals are susceptible to when using Raman technology.

Beyond the analytical performance of the portfolio of Rigaku analyzers, handheld Raman technology has the ability to scan solids, liquids, gels, or pastes. The added benefits of the 1064 nm Raman advantage means users can scan through colored packaging, such as blue and green-tinted plastic or glass, and expect results in usually less than 45 seconds. These capabilities, along with the excellent spectral performance as shown in Figure 1, make Rigaku handheld 1064 nm Raman analyzers the newest tool of choice among federal regulatory bodies and leading manufacturers. 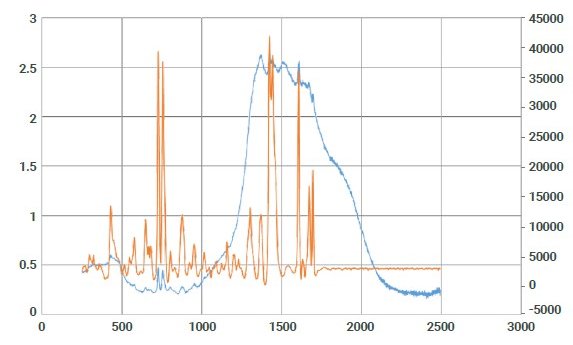 As described in the introduction, inadequate levels of ethanol are being found in hand sanitizer products when inspected by regulatory bodies. In the following case study, the Rigaku 1064 nm handheld Raman analyzer scanned five different FDA-approved commercially available brands of hand sanitizer products. Table 1 shows the results of the approximate percentage of ethanol claimed by each brand. Figure 2 shows the spectra overlay of the results. Note the presence of strong ethanol peaks identified with the Rigaku analyzer in each sample. The varied makeup of the matrix is due to additional ingredients, such as fragrance and dyes, and can be noted in the smaller spectral differences.

Table 1. The results of the % of ethanol found in leading and generic brand hand sanitizers 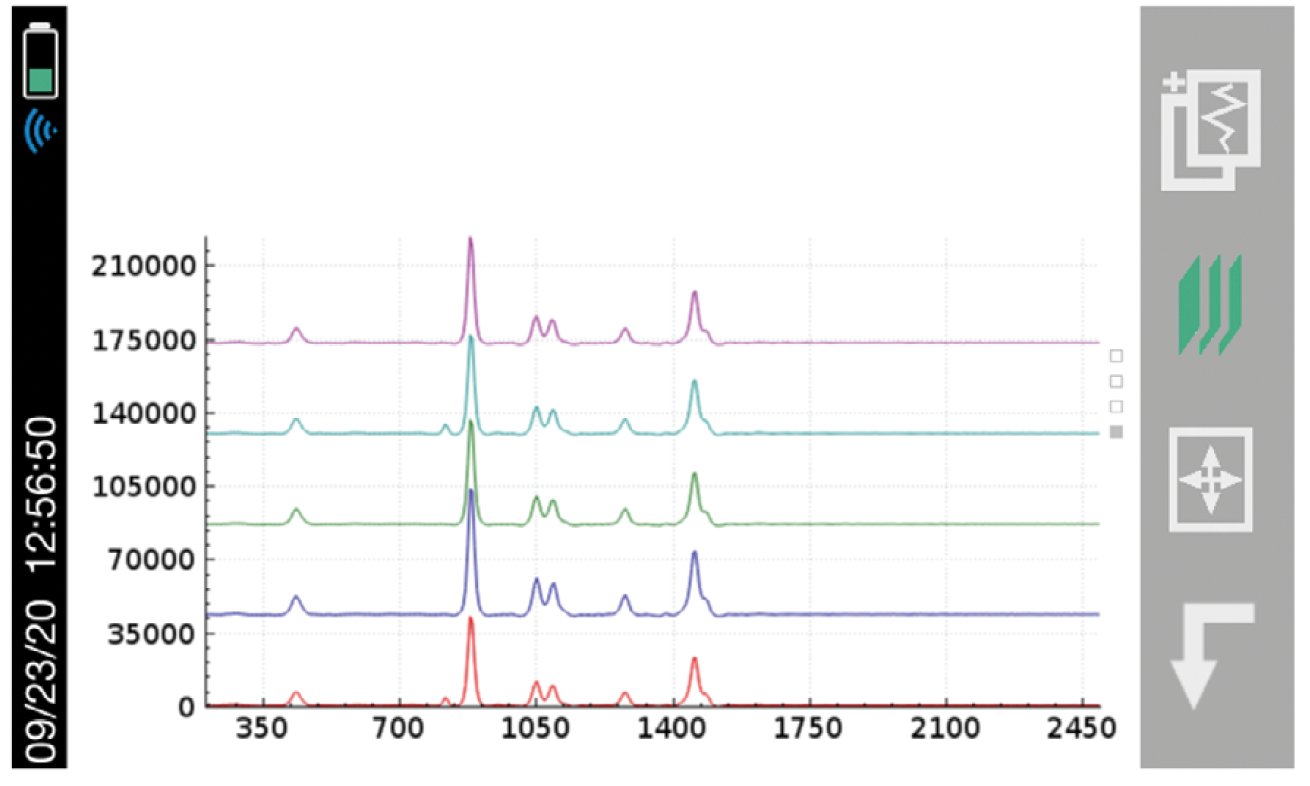 Figure 2. The spectra overlays of the results of five different brands of hand sanitizers.

Another area regulatory agencies are focusing on is the use of toxic chemicals in hand sanitizer production. The U.S. FDA recently implemented their own testing program using the Rigaku Progeny analyzer to inspect hand sanitizer imports. They are able to scan directly through bottles and determine product safety within seconds. Figure 3 below displays “Pass” results when the Rigaku handheld Raman scanned one brand of hand sanitizer that did not contain contaminants, while Figure 4 shows the results when the sanitizer was contaminated with methanol. The results of the second scan show that it contained a mixture of both ethanol and the toxic chemical methanol, resulting in a “Fail.” Figure 5 shows the spectra overlay behind the result of the ethanol and methanol mixture. 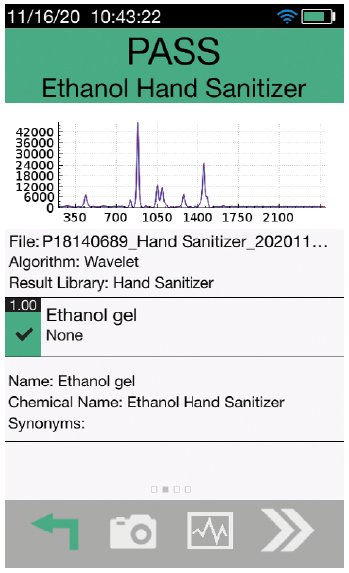 Figure 3. “Pass” result for the analysis of hand sanitizer, which only contains ethanol, using the Rigaku analyzer. 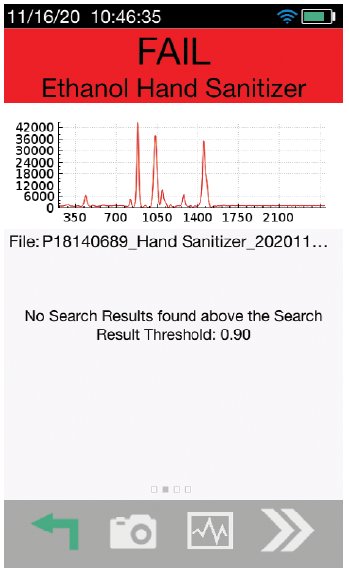 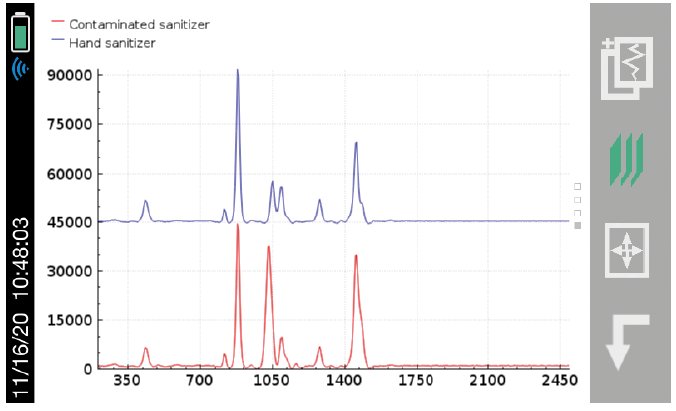 The versatility of the Rigaku portfolio of handheld Raman analyzers provides users with an on-board method for adding company-specific proprietary comparative spectra directly into the instrument’s library. By adding proprietary spectra into the instrument’s library, users have the ability to quickly scan incoming or finished hand sanitizer products with simple pass/fail results. These proprietary spectra include important information about the complete makeup of the sample, both active and matrix ingredients.

Similarly, quality chemists and R&D scientists have the ability to use Progeny’s efficient spectrometer and easy interface to quickly learn about the library-recognized components of samples. Users have the ability to quickly overlay data from multiple scanned samples and use the touchscreen interface to zoom or stack spectra. Figure 6 shows an overlay and zoomed portions of the spectra that may feature interesting product makeup information. 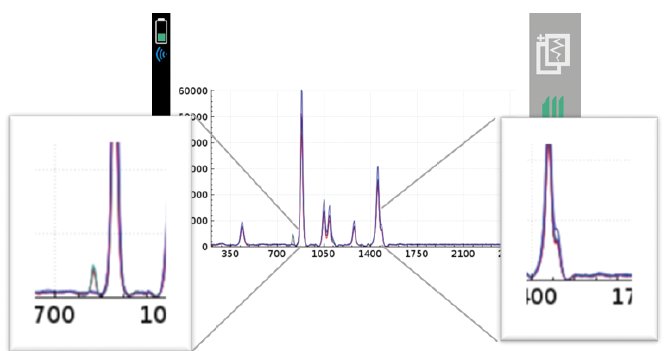 In addition to the work being done by government regulatory bodies to screen shipments of international sanitizer finished goods, there is great value in employing a handheld tool like Progeny as a screening solution in manufacturing applications, especially where market demand drives contracted manufacturer (CMO) relationships and competition among brands. Manufacturers with a healthy understanding of potential forthcoming market regulations, concern for their brand security, and a desire for efficient management of their supply chain understand the value of an easy screening tool that can be fingerprinted to both raw materials and finished goods. In this example, the Rigaku Progeny was used during inspection to screen a suspected counterfeit shipment of a leading brand of sanitizer. Progeny can give the user simple Pass or Fail results when trying to find a comparable “match” in the library.  The user can also take the analysis a step further by comparing the resulted spectra as shown in Figure 7. The unauthorized dilution of product is clearly visually evident and would be quickly flagged using a <10 second analysis by an untrained, non-scientific user. 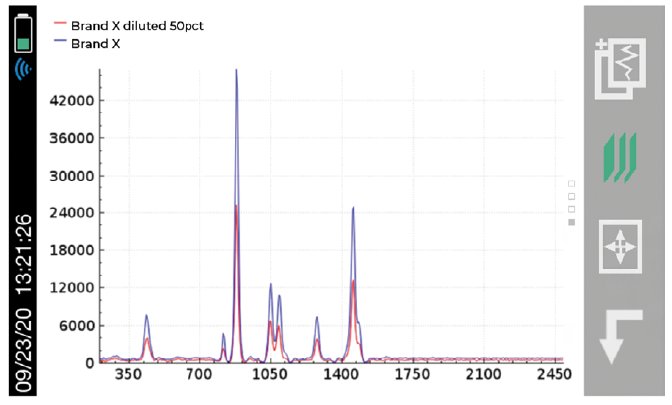 Consumer demand for hand hygiene products has skyrocketed during the current global pandemic and market reports show there is no end in sight. This growth has brought new manufacturers into the marketspace, as well as opened up a means for criminal activity to capitalize by producing sub-par or dangerous products. To support this “new norm,” regulatory agencies have put processes in place to monitor the import/export process, as well as directly test suspicious shipments. Manufacturers are implementing analysis and testing protocols as part of quality management, as well as a means to protect their brand with anti-counterfeiting measures. The Rigaku Progeny 1064 nm Raman analyzer is the tool of choice among leading regulatory bodies and manufacturers because of its ability to analyze finished products through packaging, as well as identify the chemicals used during manufacturing. 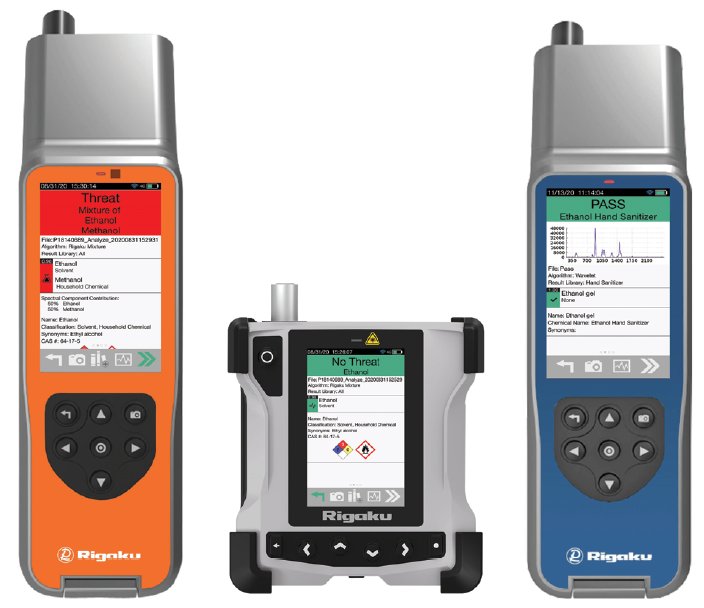