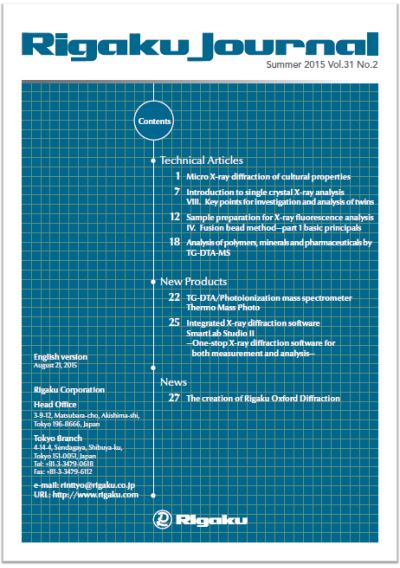 For the analysis of powders by XRF, sample inhomogeneity due to segregation, grain size and mineralogical effects influence X-ray intensity and can cause analysis errors. It is therefore recommended to analyze powder samples after fine pulverizing as described in “Sample Preparation for X-ray Fluorescence Analysis II. Pulverizing methods of powder sample.” However, when inhomogeneity can not be sufficiently removed by pulverization and more accurate analysis is required, fusion bead method is advisable.

The fusion bead method first established in the 1950s, has since progressed such that it is not only applicable to powders as oxides but also to non-oxides such as metals, carbides, sulfides which had previously been considered to be difficult. Characteristics of the fusion bead method are that (a) analysis error due to grain size and mineralogical effects can be removed, (b) matrix effect is reduced due to dilution, (c) standard samples can be prepared by mixing of reagents. Characteristics of fusion bead and pressed powder methods are compared.

In this article, general preparation methods, equipment, reagents and other important considerations for powders with typical grain size and drying conditions are described. If analysis must be performed in accordance to a specific standard test method, adhere to its prescribed conditions. In a following issue on fusion beads, various applications such as for ferroalloy, silicon carbide and copper concentrate samples will be reported.