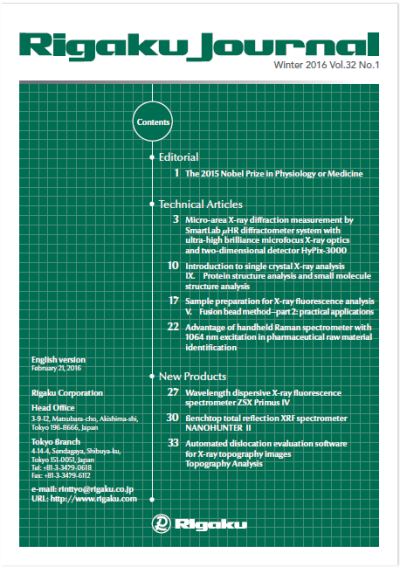 In structure analysis of proteins or small molecules, the purpose of single crystal X-ray analysis is to determine molecular structure and the basic principle is the same. However, there are considerable differences in the method pursuing each stage of structure analysis. These differences can be attributed primarily to differences in the size of the molecules. Whereas small molecules normally have a molecular weight ranging from a few hundred to thousand daltons, while that of proteins ranges from a few thousand to million daltons. There also are large differences in the components of the molecules and their chemical degrees of freedom. The atomic species comprising small molecules, and their framework, are diverse and there are no limitations in principle, however proteins are basically made up of 20 amino acids of known structure. Furthermore, the proteins of any living organisms on the earth are all comprised of L-amino acids alone, with just a few exceptions, and thus their absolute configurations are known. Also, an α-helix, which is one distinctive structure of proteins, is always a right-handed helix when tracing from the N-terminus to the C-terminus.

Despite the large amount of structure-related information which exists beforehand as described above, it is not unusual for structure analysis of a new protein to take a few years, including the stages of expression and purification of the target molecule. Why is this troublesome task carried out? The reason is that various benefits can be obtained once the structure of a protein has been determined.