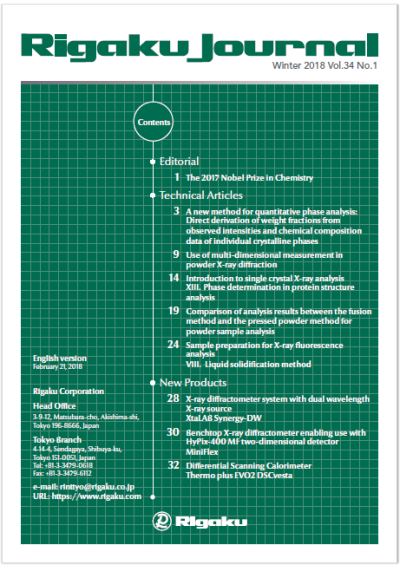 The principle of single crystal X-ray structure analysis is the same for organic/inorganic materials and proteins. However, although the steps of structural analysis are the same, there are major differences in the method of executing each step between structural analysis of small molecules and proteins. One of the steps where there is a major difference is the phase determination method for solving the phase problem, regarded as the central problem of single crystal X-ray structure analysis.

As an experimental phase determination method for protein structure analysis, the MIR (Multiple Isomorphous Replacement) method serves as the classical approach. The MIR method derives the phase of the target (native) protein by using the slight shifts in phase which occur when heavy atoms are incorporated. This paper explains the MIR method, and the MAD (Multiple Anomalous Dispersion) method which uses the wavelength dependence of anomalous dispersion.