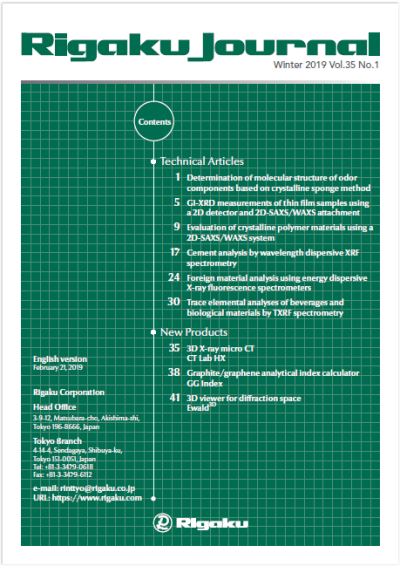 Sensing odors is an extremely important ability humans have as living organisms. This ability is required for humans to maintain appropriate eating behavior and to protect themselves from imminent danger. The term “odor” includes naturally occurring odors from food and flowers, and artificial odors from synthetic essences, as well as a variety of other smells.

Humans sense odors when they inhale airborne molecules through their nostrils. Based on this fact, odors basically consist of volatile substances (compounds). In order to learn what the molecular structure of trace amounts of volatile odor components is like, many studies and analyses have been conducted for many, many years across different technical fields.

The human sense of smell can even sniff out optical isomers. In the case of limonene's optical isomers , whereas the d-isomer has the refreshing smell of citrus fruit, the l-isomer has the smell of petroleum. When substances with an identical composition formula but a different 3D structure are floating in the air, humans sense these substances as totally different odors. This is because sensing an odor starts with the coupling of an odor molecule with a G-protein coupled receptor (GPCR). The state of the coupling varies depending on the shape of the odor molecule, including with which GPCR the odor molecule can couple (from reportedly over 800 kinds of GPCR), at which part of the GPCR, and how tightly. It is believed that this accounts for the uniqueness of odors.

Therefore, just as the molecular structure of a pharmaceutical compound (including its absolute configuration) is important when it works as a “drug,” the odor’s molecular structure is considered to play a critical role when an odor is generating the intended sense of “fragrance.” An extremely low concentration of an odor component can react with the receptor in the human nose in the form of odor, which means that only a trace amount of such a component exists in the environment. For this reason, if you want to extract a specific odor component from natural raw materials for analysis, you may end up obtaining only several micrograms or less from a large quantity of raw material (in the range of several kilograms to several tons). This is why gas chromatography (GC), liquid chromatography (LC), and mass spectrometry (MS) are widely used today as mainstream analytical equipment capable of analyzing extremely small amounts of samples. However, even with the help of these analytical techniques, directly determining the 3D molecular structure of odor components is impossible.

On the other hand, single crystal X-ray structure analysis is suited for the determination of the 3D structure of hitherto unknown substances. However, this analytical technique requires large quantities of high purity samples for crystallization, and for this reason it has seldom been used for the analysis of odor components in the past. The emergence of the crystalline sponge method has dramatically changed this situation.

This report introduces examples of our attempts to analyze the structure of odor components, in which volatile substances emitted from natural products are directly trapped without the isolation of odor components or sample preparation, using the “crystalline sponge method”, a single crystal X-ray structure analysis method that does not require sample crystallization.