Structural changes of a Whistler alloy due to heat treatment

Structural changes of a Whistler alloy due to heat treatment

Thin film X-ray diffraction can be used to study variations in surface and interface states caused by heat treatment, as well as changes in crystal structure.

Using the in-plane method available with Rigaku's Ultima IV multipurpose diffraction system, temperature-dependent behavior of a Whistler alloy 100 nm thin film (Co2MnGe) on a silicon substrate with oxide thin film was studied, as well as the creation of a hetero phase due to heat treatment.

From this measurement result, it is found that the Co2MnGe film, which was hardly crystallized in the as-deposited state, is crystallized by heat treatment into the L21 structure, and that when the temperature is increased further, cobalt is precipitated on the film. (The L21 crystal structure consists of four cubes where the atom at the center of the body differs from the atoms at the corners of the body and adjoining cubes have different atoms at the body center.)

As a result of performing precise diffraction measurements and reflectivity measurements, it is found that the crystallinity, lattice constant and the surface and interface roughness also depend on the temperature of heat treatment. 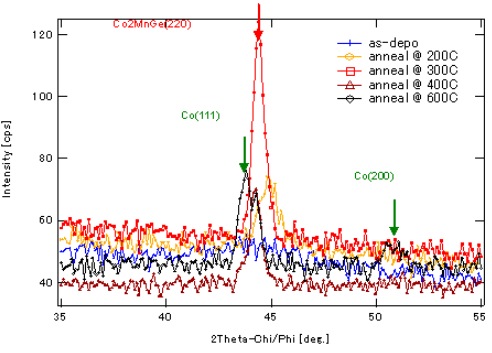